Salam and I hope all of you are in good health.

Following the images I uploaded in the previous post, I decided to prepare a wide wallpaper from that Image and now you can download it from here. Please click on the image to enlarge (1900 * 1068) and then download it.

May Allah hasten the reappearance of the promised Mahdi, a man from the descendants of Hussain (PBUH)

Day of Ashura | Why did Imam Hussain move to Karbala?

Ashura – The holy shrine of Imam Hussain (PBUH) in Karbala

Imam Hussian (PBUH) was the prophet Muhammad’s grandson, who left the Hajj pilgrimage and moved to Iraq with all of his family and friends, then he was surrounded by  Yazid’s army of 30,000 people on his way, in the land called Karbala, so there were no way out for Imam Hussain and all his 72 friends except defending themselves. They fight with no water for three days and all of them were killed and beheaded on the day of Ashura and all their women and children were captured and moved to Syria along with the heads.

Did Imam Hussain knew his fate in Karbala?

Not only Imam Hussain knew that he will be killed on the day of Ashura in Karbala but also all the Prophets of God knew about the detail of this catastrophe and all cried for Imam Hussain (PBUH).

Ashura – The name of Imam Hussain (PBUH) in Araic

But why did Imam Hussain move to Karbala?

There were three causes for Imam Hussain’s movement or in a better word, Imam Hussain revolution which we have already explained it in a post before. The causes were gained from a book written by a great Iranian philosopher and cleric, professor Mortaza Motahari.

The summary of these three causes were as follows:

Which one was the main reason of Imam Hussain’s revolution? END_OF_DOCUMENT_TOKEN_TO_BE_REPLACED

There is no doubt that the greatest and the most painful massacre in history was the martyrdom of Hussain (PBUH) and his 72 companions on the day of Ashura.

Imam Hussain (PBUH) was the prophet Muhammad’s grandson who was surrounded by an army of 30,000 people in Karbala, with no water for three days! They fought deliberately in the battlefield but they were all killed and beheaded one by one in front of their families on one day which is called Ashura.

Following the martyrdom of Hussain (PBUH) and his companions, their bodies were trampled by the hoofs of the horses, their tents were burnt in fire and their women and children including Lady Zeinab (PBUH), the prophet Muhammad’s granddaughter, were all captured and moved along with their heads toward the Levant.

Day of Ashura was a day Imam Hassan Al-Mujtaba (PBUH) said about it to Imam Hussain (PBUH) before his martyrdom:

Tomorrow is the day of Ashura in 2018; The day in which mourning for Imam Hussain will reach its climax by millions of people around the world….

Note: All images made by ashuraaa.wordpress.com are free to use to introduce Imam Hussain (PBUH) to the world.

The pilgrimage of Imam Hussain in Ramadan + Keys to the heavens

Congratulation to all of you for the holy month of Ramadan.

As you may know, the pilgrimage of Imam Hussain (PBUH), the prophet Muhammad’s grandson, is recommended in Ramadan.

It is written in the book of “Mafatih al-Jinan” (or “keys to the heavens”) that the pilgrimage of Imam Hussain is recommended on: 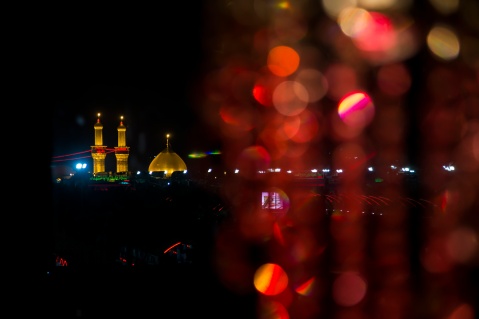 It is also written in Mafatih al-Jinan that God forgives whoever makes a pilgrimage to the holy shrine of Imam Hussain (PBUH) on the night of destiny.

You can download the application of Mafatih al-Jinan in Persian, Arabic and English languages for Android/iOS from here.

This application, unlike the others, is the complete version of the book of Mafatih al-Jinan  so you can easily use it instead of the book.