Salam to all my brothers and sisters

In this post, I’ve prepared an outstanding part of Imam Hussain’s prayer to God on the day of Arafah.

Click on the image to enlarge and save it

O’ God! That harm and hardship which you warded off from me was more than well-being and joy which was revealed to me.*

I found this quote of Imam Hussain (PBUH) very impressive as we often notice to the amount of happiness and easiness which is coming to us by God and unfortunately we usually do not notice to the whole hardship and adversities which could have surrounded us but God warded them off.

Congratulation to the 12th Imam and the Imam of our time, Imam Mahdi, and all of his followers for Eid al-Ghadir.

May Allah hasten the reappearance of him and bless him and all of his followers.

Ghadir Khumm is a place between the two cities of Mecca and Medina where the holy prophet Muhammad (PBUH) stopped while he was returning from his last Hajj pilgrimage and waited for three days till all the people gathered. Then, he held up Imam Ali’s hand and said:

“for whoever I am his leader, this Ali is his leader.”

The Prophet continued about Imam Ali:

Read more about the event of Ghadir Khumm at here

Imam Hussain’s prayer to God on the day of Arafah

Day of “Arafah” is the 9th day of Dhu al-Hijjah, the twelfth month in the Islamic calendar and the month before Muharram.

It was narrated that on the day of “Arafah”, Imam Hussain (PBUH) along with a group of his family members and some of his followers came out the tent at the desert of “Arafat”, a place located near the city of Mecca. Imam Hussain then stood towards the Ka’bah and raised up his hands and pray to God while his face were flowed with tears.

Imam Hussain’s prayer which is called Arafah prayer (Dua Arafa) contains with the highest theological and spiritual teachings. Shia Muslim people recite this Dua on the same day each year during Haj pilgrimage or even far from Mecca at their local mosques or the holy shrines.

Arafah 2018 is on this coming Tuesday, on the 21th of Aug. So, I prepared the following image with a part of Imam Hussain’s prayer to God on the day of Arafah:

“…O’ my Lord!…and [O’] the revealer of the Torah and the Bible and the Psalms and the Furqan, and the revealer of  kaf-ha-ya-`ayn-sad and Ta-ha and Ya-Sin and the Quran, full of wisdom! You are my haven when the wide courses fail to carry me and when the earth, despite its width, becomes too narrow to bear me…”

-A part of Dua Arafah by Imam Hussain(PBUH)

Imam Hussain Quote at the official house of the Grand Leader, Imam Khamenei

Each time when the supreme leader, Imam Khamenei, has a meeting with people at his official house, you can see an special quote related to that meeting with a great calligraphy on the wall behind the leader.

Several days ago, the leader had another meeting with the speaker, lawmakers and a number of staff members of the Iranian Parliament and you can see a quote by Imam Hussain (PBUH), the prophet Muhammad grandson, on that wall. The same quote I had already prepared it as English image, the one about the God’s gifts:

The translation of the quote on the above image:

Beware that the people’s need of you, are the God’s gifts to you. Thus do not become tired of these gifts.

Imam Hussain quote about the God’s gifts in English: 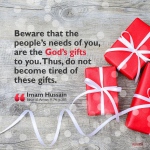 Ashura | God’s gifts in a quote by Imam Hussain

Imam Hussain was the prophet Muhammad’s grandson and the third Shia Imam who was martyred on the day of Ashura at Karbala. He had only a few men along with the women and children when he was surrounded by the Yazid’s army of 30,000 people but he still refused to pay allegiance to Yazid…

Why didn’t Imam Hussain save his life by paying allegiance?

How was the life in Imam Hussain’s view?

In the following Image you can see the God’s gifts in the view of Imam Hussain (PBUH):

Beware that the people’s need of you, are the God’s gifts to you. Thus do not become tired of these gifts.

Prophet Jesus in a quote by Imam Mahdi

Merry Christmas to all of our Christian brothers and sisters and Happy birthday of the Prophet Jesus to all of you.

Prophet Jesus is one of the five greatest prophets sent by God to us. 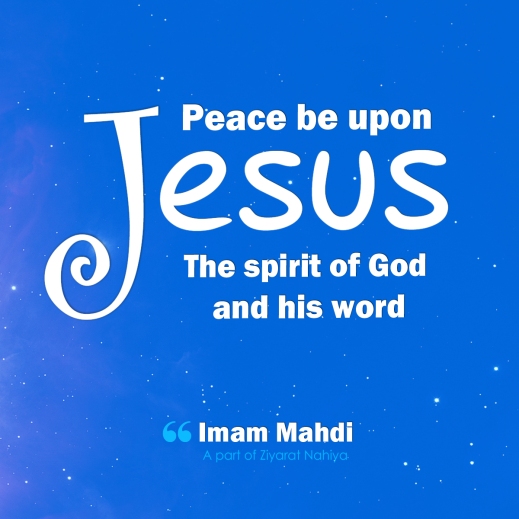 In the following Images, You can see the salutation of Imam Mahdi to the prophet Jesus in Ziyarat Nahiya.

Peace be upon Jesus, the spirit of God and his word

-A part of Ziyrat Nahiya by Imam Mahdi

Mahdi and Jesus in a quote by Prophet Muhammad (PBUT)

Imam Mahdi is a man among the holy prophet Muhammad’s progeny and a man from the descendant of Imam Hussain (PBUH). He is the 12th Imam living among us now according to the Shia belief although we do not know him. It is stated that Imam Mahdi is the last savior of man who will fill the world with justice and equity when he reappears [Read the narration at here] and the holy prophet Jesus will descend from heaven to help him. 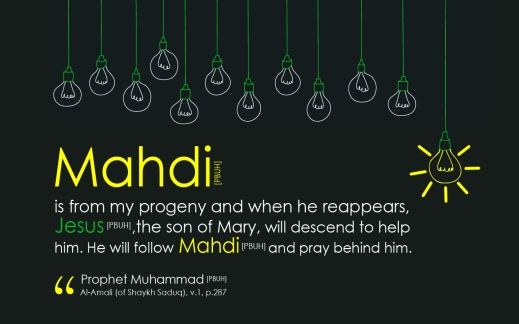 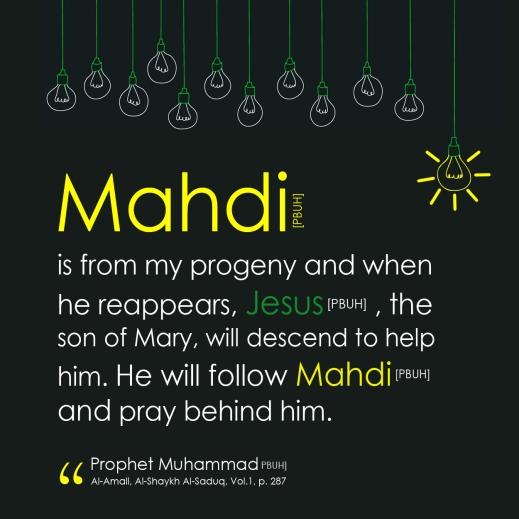 “Mahdi [PBUH] is from my progeny and when he reappears, Jesus [PBUH], the son of Mary, will descend to help him. He will follow Mahdi [PBUH] and pray behind him.”

Arbaeen Quote : Visit God in his throne by the pilgrimage of Imam Hussain’s holy shrine

The pilgrimage of Imam Hussain’s holy shrine was recommended many times in the Islamic and Shia quotes (ahadith). You can see one of such quotes stated by Imam Reza (PBUH), the 8th Shia Imam, in the following image: 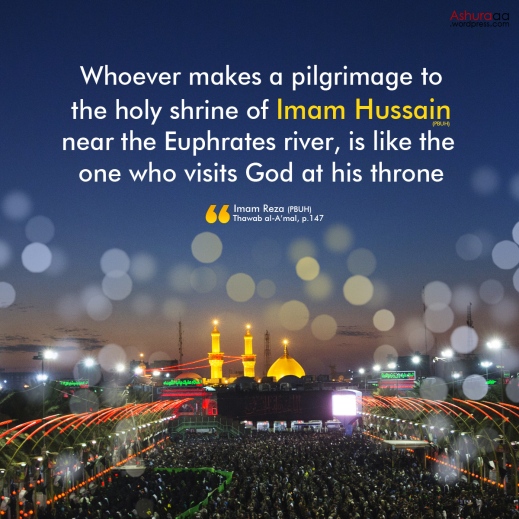 Whoever makes a pilgrimage to the holy shrine of Imam Hussain near the Euphrates river, is like the one who visits God at his throne.

Translated to English by ashuraaa.wordpress.com

All images on this blog are free to share to introduce Imam Hussain to the world.