Husayn was martyred on Ashura day while he was thirsty

Drinking water is universally held to be one of the most basic of human rights and is vital to the survival of any living creatures, but Imam Husayn, the Prophet Muhammad’s grandson, was martyred along with all his companions on the day of Ashura in Karbala while they were all thirsty. The tents of his family were pitched just a walking distance from the banks of the river Euphrates and yet he and his camp – including his six month old baby – were not allowed a single drop. 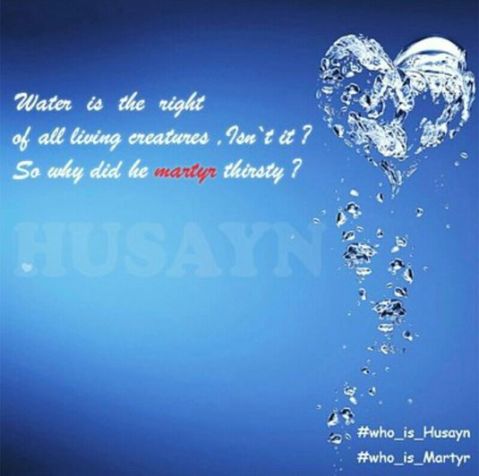 Access to water had been closed for three days and nights, but during this time, Hadrat Abbas, the brother of Imam Husayn, was able to get some water for children on one or two occasions, including the night of Ashura and That’s why Abbas had been received the nick name of Saqqa which means “water carrier”.

Ashura – Remember Imam Husayn (PBUH) when you are drinking water

On the day of Ashura, Hadrat Abbas went to get some water again. The number of men who guarded the river bank was four thousand. END_OF_DOCUMENT_TOKEN_TO_BE_REPLACED

Imam Hussain is the Prophet Muhammad’s grandson and the third Shia Imam but he dose not belong only to Shia Muslims. His life can inspire all the people.

In the above Image I used the Prophet Muhammad’s saying about Imam Hussain (PBUH):
حسین منی و انا من حسین
“Hussain is from me and I am from Hussain.”

This saying was quoted in many Shia and Sunni books including Bihar Al-Anvar V.43 and Sonan Termizi, V.5, p.658.