As you may heard the news , the mourning flag of Imam Hussain was raised at former US embassy in Islamic republic of Iran with the beginning of  Muharram 2020 and the mourning ceremony for Imam Hussain is held every night at 20:30 pm at the former embassy for the first ten nights of Muharram.

Raising Imam Hussain flag at a US embassy and its conversion to the Hussainiya (A place to hold Imam Hussain’s mourning ceremony) has a great message to the US government and to all the tyrants of the time. A message more important than the message of the victory is about to happen.

Although this blog has been already blocked by Facebook and Instagram since I wrote a post about G.en.eral S.o.leimani but I could not ignore the former embassy photos. 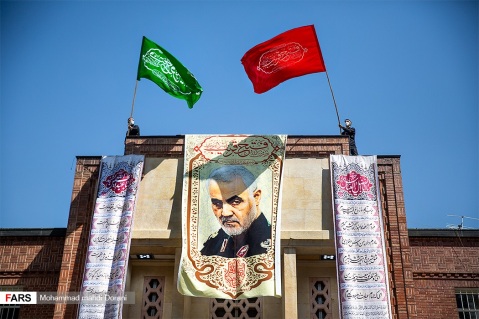 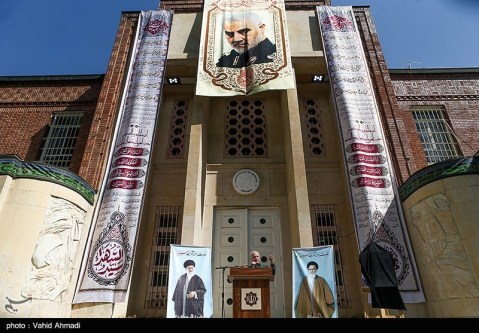 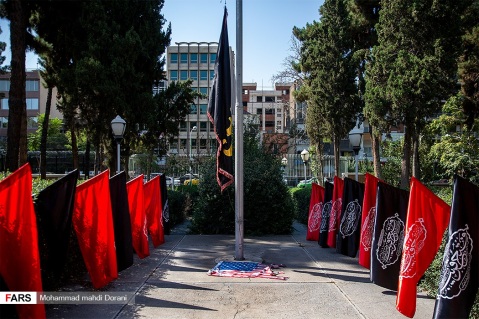 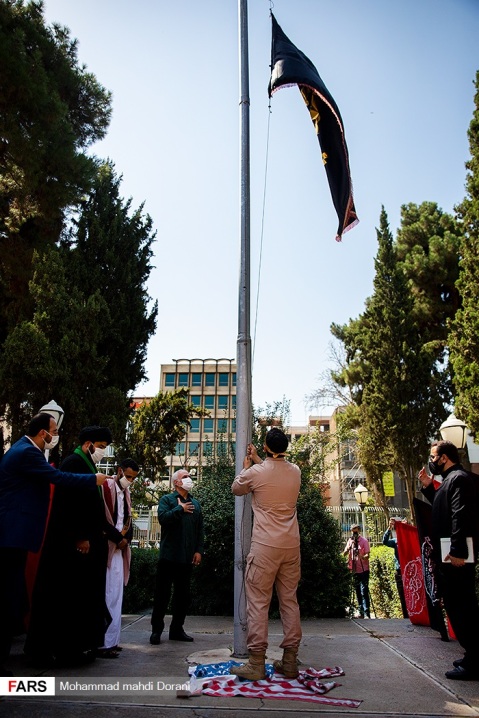 I feel I was going on a walk toward Karbala on Arbaeen but surprisingly I was in Qom , a holy city in Iran, near the capital city of Tehran. I’ve seen so many different flags in today’s rally against Zionism and USA. There were more flags than what I’ve seen on Arbaeen. I  did not even know the name of countries I’ve seen their flags. At first I thought some Iranian people might pick up some flags for the Quds day but their faces were not seem to be Iranian people. I also asked some of them to be sure about it and I found that’s true. The Quds day of this year was a picture of the unity of nations to support Muslim people of Palestine against the occupying regime of Zionism.

I only took the photos of some flags in the rally and I have taken them while I was exactly at the end of the path of the rally not in the middle of it. that’s why you can not see the crowd in some photos. 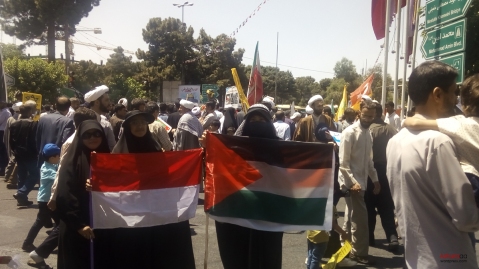 Thanks girls! When I asked these girls to take their photo, they kindly accept it. I asked them for their country name and found that they were from Indonesia. 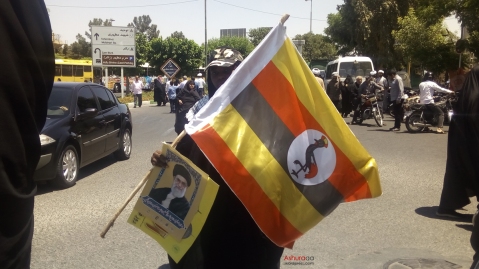 Arbaeen | Flags of countries on the way to Karbala 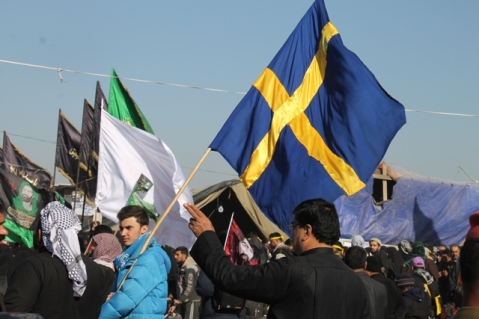 Flag of Sweden on the way to Karbala for Arbaeen 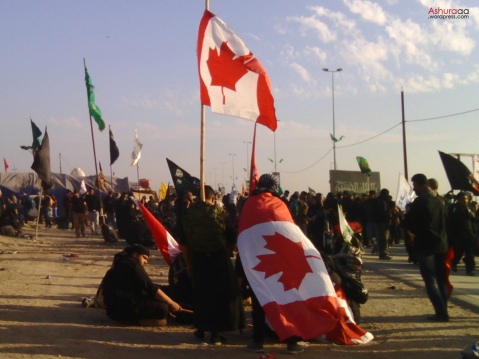 Flag of Canada on the way to Karbala

END_OF_DOCUMENT_TOKEN_TO_BE_REPLACED

Ashura 2017: Millions of Shia Muslims mark the day of Ashura in Karbala + photos

Day of Ashura is the culmination of a  ten day annual mourning period in the lunar month of Muharram for the prophet Muhammad’s grandson who was the third Shia Imam.

Today was the day of Ashura in 2017. On Sunday, hundreds of thousands of pilgrims, traveling from worldwide descended on Karbala, to the holy shrine of Imam Hussain (PBUH) with officials putting their numbers at more than 3 million. 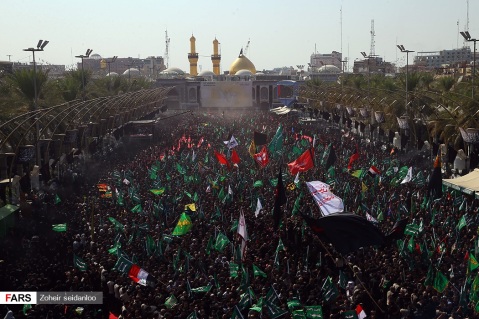 Ashura 2017: Shia Muslims mark the day of Ashura in front of the holy shrine of Imam Hussain in Karbala 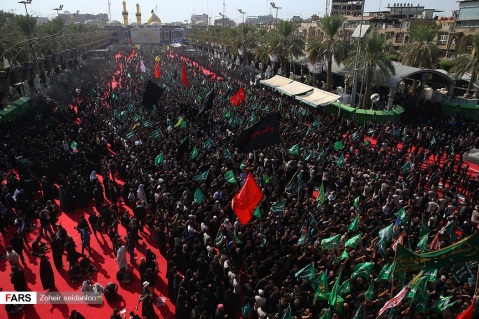 Shia Muslims dressed in black, mourn for the martyrdom of Imam Hussain who was beheaded violently in thirsts and his body was left on the land, with horses running on him… All 72 of his men including his sons and families had already been beheaded one by one in front of his eyes. END_OF_DOCUMENT_TOKEN_TO_BE_REPLACED

Today is the first day of  Muharram and Ashura is coming in 9 days later.

Every places such as the streets, Mosques and the holy shrine of Imam Hussain, Imam Reza, lady Fatima and Jamkaran holy mosque in Iran have been covered with black for the martyrdom anniversary of Imam Hussain. 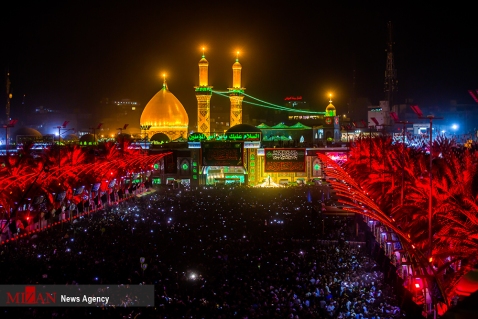 Ashura 2017 -The first night of Muharram 2017 in front of the holy shrine of Imam Hussain in Karbala, Iraq. 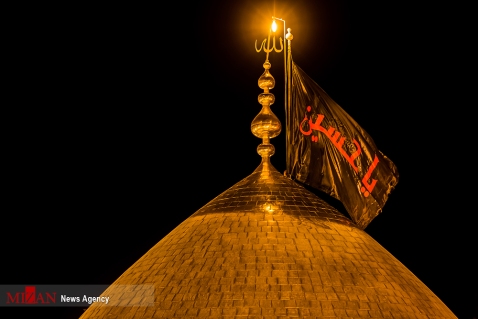 Ashura – The first night of Muharram 2017 in Karbala: Exchanging the flag of the holy shrine of Imam Hussain 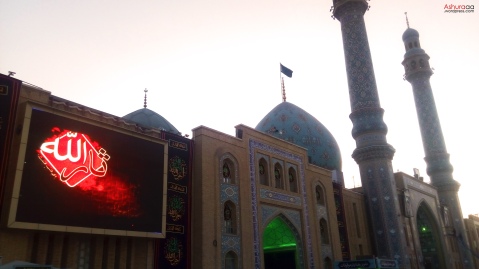 Shia muslim people were also dressed in black, commemorate all the first ten days of Muharram to follow the way Imam Reza, the 8th Shia Imam, was mourning for Imam Hussain. END_OF_DOCUMENT_TOKEN_TO_BE_REPLACED

Millions of Shia muslims across Iran as well as elsewhere in the world commemorate the anniversary of the martyrdom of Imam Hussain, the Prophet Muhammad’s grandson and third Shia Imam on the day of Ashura. 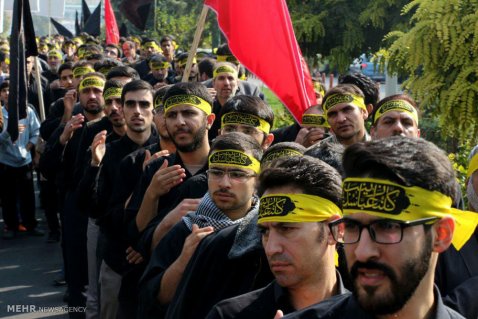 The yellow head band contained an Arabic sentence means: “We are all your Abbas, O’ Zeinab!” 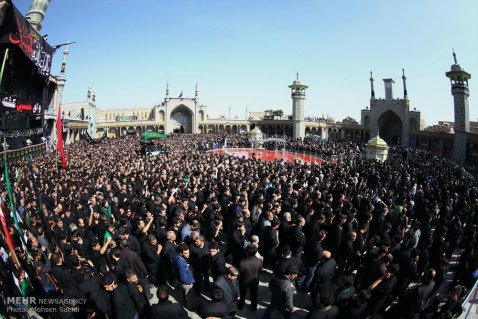 END_OF_DOCUMENT_TOKEN_TO_BE_REPLACED

Some Shia Muslims held a procession on the day of Ashura to commemorate the martyrdom anniversary of the prophet Muhammad’s grandson, in spite of the snowy weather.

Photos were taken on the day of Ashura in 2014, in the north of Iran. 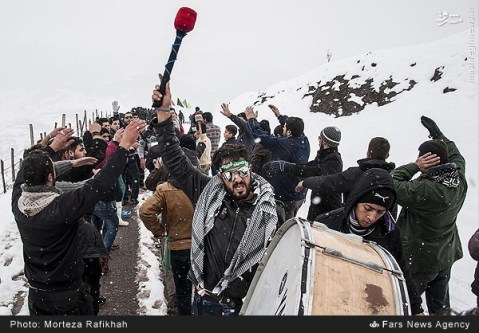 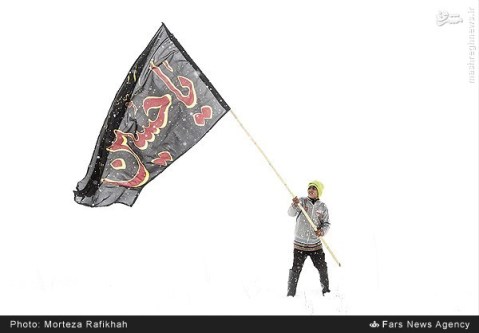