Day of Ashura | Why did Imam Hussain move to Karbala? 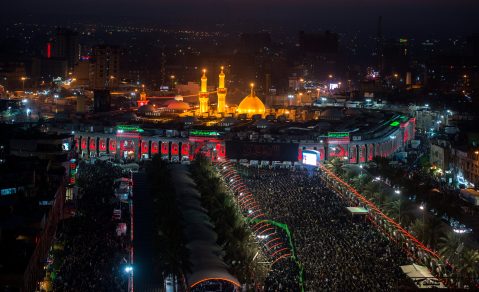 Ashura – The holy shrine of Imam Hussain (PBUH) in Karbala

Imam Hussian (PBUH) was the prophet Muhammad’s grandson, who left the Hajj pilgrimage and moved to Iraq with all of his family and friends, then he was surrounded by  Yazid’s army of 30,000 people on his way, in the land called Karbala, so there were no way out for Imam Hussain and all his 72 friends except defending themselves. They fight with no water for three days and all of them were killed and beheaded on the day of Ashura and all their women and children were captured and moved to Syria along with the heads.

Did Imam Hussain knew his fate in Karbala?

Not only Imam Hussain knew that he will be killed on the day of Ashura in Karbala but also all the Prophets of God knew about the detail of this catastrophe and all cried for Imam Hussain (PBUH).

Ashura – The name of Imam Hussain (PBUH) in Araic

But why did Imam Hussain move to Karbala?

There were three causes for Imam Hussain’s movement or in a better word, Imam Hussain revolution which we have already explained it in a post before. The causes were gained from a book written by a great Iranian philosopher and cleric, professor Mortaza Motahari.

The summary of these three causes were as follows:

Which one was the main reason of Imam Hussain’s revolution?

Ayatullah Sayyid Ahmad Alamolhoda who is the representative of Imam Khamenei in Mashhad explained it more in the mourning ceremony held on the second night of Muharram 2019 at the holy shrine of imam Reza (PBUH). He also stated that there were three elements for Imam Hussain’s revolution:

2- The cooperating element: Although the people of Kufah, in Iraq, wrote many letters and invited  imam Hussain to help them for Islamic revolution but If this was the only reason, Imam Hussain would stop going to Iraq when he found out that the people of Kufa ignored their allegiance to his messenger and his cousin, Muslim ibn Aqil, and killed him alone.

3-The invasive element: Imam Hussain said “I want to promote virtue and prevent vice…”. This was  the main and absolute reason of Imam Hussain’s revolution. But Which virtue and vice did he want to promote and prevent? that vice was the Yazid’s government or the ignorance of political deviation by people? or that virtue was the justice he wanted to rise up for? All of these were true but that vice which Imam Hussain wanted to prevent was more significant and that was the “reversion of values”

The values at the time of ignorance were money , wealth, and welfare. The slaves and people with no money were oppressed on those days. When the prophet Muhammad (PBUH) rose up, the values were changed among people but these values were reversed again to the time of ignorance following the martyrdom of the holy prophet, thus people wanted only to live comfortably and in peace, no matter what happened to Islam or social justice.

This was why the 80,000 people of Imam Hassan’s army left him in one day and joined to Mouaviya’s army. This is the reason that we read: “May Allah curse the people who killed you…” in Ziyarat Ashura before cursing on Shimr or Yazid, the tyrant of the time…

Imam Hussain’s revolution was against this reversion of values. If the values were not revered to the time of ignorance, Muaviya or Yazid would not become their rulers….

Read more about why imam Hussain rose up in English at khamenei.ir